IRVING PARK — Angel Carbajal was returning to his Irving Park home from Home Depot on Wednesday morning when he saw a man sprinting down the middle of his street, running from the scene of a car wreck. He then saw his neighbors running after the man.

Around 7 a.m. Wednesday, a driver for Rosehill Towing and Recovery Inc. was going the wrong way down the 3300 block of West Cuyler Avenue when he hit a speed bump, neighbors said. The driver went over the bump "way too fast" and crashed into cars, damaging seven of them, said neighbor Sharon Costanza. 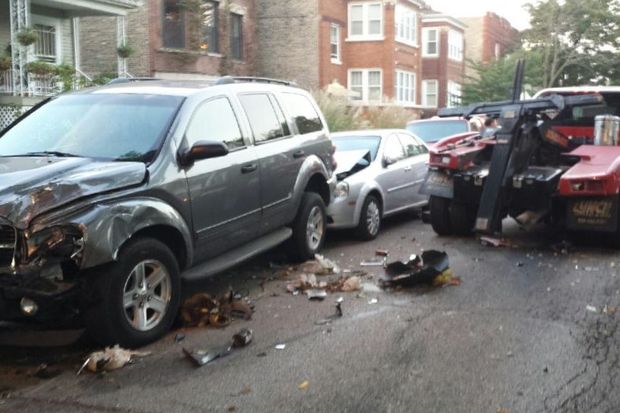 The tow truck hit the SUV, which then backed onto Angel Carbajal's car. [Provided]

Five of the cars were towed from the scene and were most likely totaled, neighbors said. Two cars that remained on the block Wednesday evening suffered heavy front-end damage, including Carbajal's, he said.

"It was bad," Carbajal said of the damage his car suffered. "We'll see what happens."

The tow truck was also likely totaled and was towed away from the scene, neighbors said.

After the crash, the tow truck driver tried to run away, but neighbors followed him and told police where he was, Costanza said. 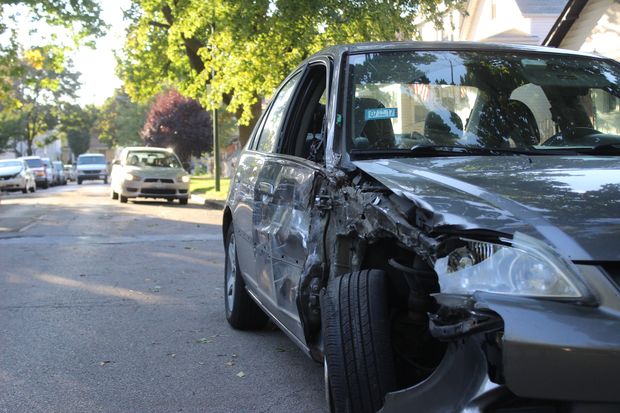 One of the smashed cars that remained on the block suffered heavy front and side damage. [DNAinfo/Joe Ward]

Police could not say if anyone had been charged or cited in the crash, but they did confirm a truck hit a parked car on the block and no injuries were reported.

The neighbor, who asked that his name not be printed, said he heard the tow truck hit the speed bump.

"I was right inside the window. My car was in the air," the man said. "I saw him and he started running."

The man said his daughter was getting ready for work at the time of the crash and usually drives his Subaru to her job.

"She could have been in the car," he said. "I've never seen nothing like this happen."