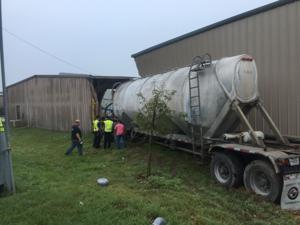 No one was hurt Tuesday morning when a disabled 18-wheeler tanker truck slipped off the tow truck pulling it and rolled into two industrial buildings in New Braunfels, a city police spokesman said. 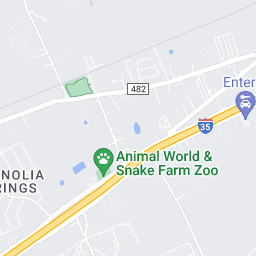 No one was hurt Tuesday morning when a disabled 18-wheeler tanker truck slipped off the tow truck pulling it and rolled into two industrial buildings in New Braunfels, a city police spokesman said.

“The 18-wheeler was unoccupied, and both buildings were unoccupied at the time of the crash, and no injuries were reported,” he said. “However, both buildings suffered heavy damage from the collision.”

He said the crash happened about 5:45 a.m. Tuesday in the 4200 block of Farm-to-Market Road 482, where police and New Braunfels Fire Department personnel were called for reports of a major accident.

Crews arrived and found a large tow truck had been driving south on FM 482 near Solms Road when the truck it was hauling detached from the wrecker, Ferguson said. He said the tanker began rolling free through a grassy area and then it crashed into two “metal, industrial-style buildings.”

He said the runaway tanker truck remained upright and spilled none of its lime powder load.

Authorities closed traffic on FM 482 from the southbound Interstate 35 frontage road to Solms Road. They kept it closed about three hours while investigation and debris clearing commenced.

“The investigation revealed that the wrecker hit a bump in the road, which caused the tanker it was hauling to bounce up,” Ferguson said. “That bounce caused the safety straps to break and dislodged the tanker from the hook that was securing it to the tow truck, allowing the 18-wheeler to roll off the wrecker.”

Fred Heimer said he and his family have owned buildings in the industrial park since the older ones were built in the 1980s. He said the buildings damaged Tuesday were built in 2014 and currently house a beverage company and a martial arts studio.

“The worst part of it is it hit where the electricity goes in. Both buildings are without power,” Heimer said. “It’s going to be a challenge the next couple of months to get it put back together.”

Allen Salmons said he is manager at Ellis Sales Company, a manufacturer of oil drilling parts. The company already was facing challenges Tuesday afternoon, he said.

“We have no electricity, no water, no internet, no nothing right now,” Salmons said.

He predicted it would be a week before things got back to business as usual.

The front of the truck smashed into the buildings, went about cab-deep and left the trailer sticking out of the structures, NBFD Battalion Chief Donny Obuch said. He said emergency crews initially thought a hazardous liquid was leaking from the bottom of the truck, but later learned a water main was broken and water was the liquid they saw under the vehicle.

“The second hazard is it had hit directly on the electrical meter boxes for the entire complex,” Obuch said. “In order for us to pull out the vehicle, we had to get NBU there and wait for NBU to secure the electrical lines prior to us surveying the damage to see if we could remove this vehicle.”

Once the electrical issue was no longer a problem, the tow truck operator pulled the semi-truck from the buildings, he said. Firefighters found no leaking hazardous materials and no injured people, Obuch said.

Things could have been a lot worse.

“For the amount of damage that was done and the potential hazard that existed, it turned out to be a very good call for us,” he said.